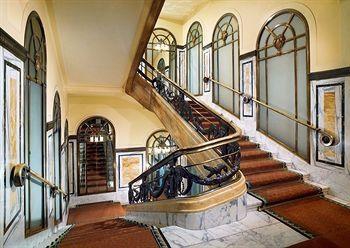 This Vienna hotel is located just opposite the Vienna State Opera House. The Bristol Vienna is also within walking distance of the center city shopping zone and the Museum Quarter. The Hotel Bristol Vienna is approximately 30 minutes by train to the airport. Car transfers to cover the 20 km distance to the airport are also available from the hotel.

There are 140 rooms in the 5 star Hotel Bristol Vienna Austria. They are furnished in an upscale turn of the century style. Rooms have Internet, satellite TV, and a welcome fruit basket.

The Bristol Hotel in Vienna opened in 1892, and has operated continuously since that time. The décor highlights antiques from the turn of the century, and the lobby/lounge has been designed to serve as an informal meeting space. There are two restaurants in the hotel, the Korso Bei Der Oper serving upscale meals and the Rotisserie Sirk offering basic fare. There are 10 formal meeting rooms, a terrace overlooking the State Opera House, and a fitness center.