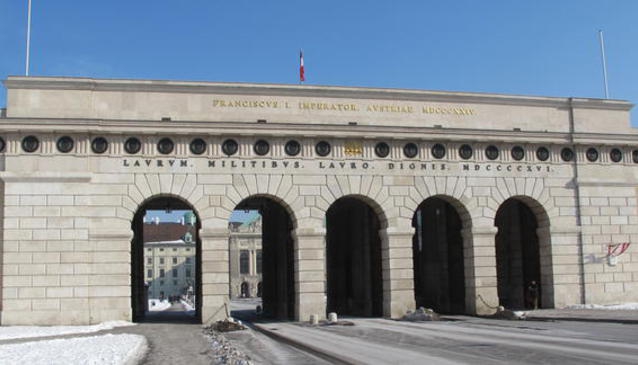 The Hofburg was originally a medieval castle, but only the chapel still reminds us of that (go visit the famous chapel choir performing every Saturday morning at 11.00am!).

The more powerful the Habsburg dynasty became, the more money on architecture and pomp they spent. You can find nearly any architectural style here, from Gothic to art nouveau.

Today the former imperial palace is used as a congress center, or for representative reasons by the Austrian government. Apart from this center it houses many of the most magnificent buildings and museums you can visit in Vienna: for example 'the Österreichische Nationalbibliothek' (National Library), the 'Schatzkammer' (Imperial Treasury), a museum for musical instruments, another one for weapons, the 'Museum für Völkerkunde' (Museum of Ethnography) and the famous 'Spanische Hofreitschule' (Spanish Riding School).

In front of the Hofburg palace you will find the very well known square called 'Heldenplatz' (Square of Heroes). You will be able to see two statues showing Archduke Karl, who won the battle of Aspern against Napoleon (1809), and Prince Eugene of Savoy, who defeated the Turks - a reminder of Austria's glorious past. 'Heldenplatz' is more than a square, it is one of Austria's symbols of national identity.