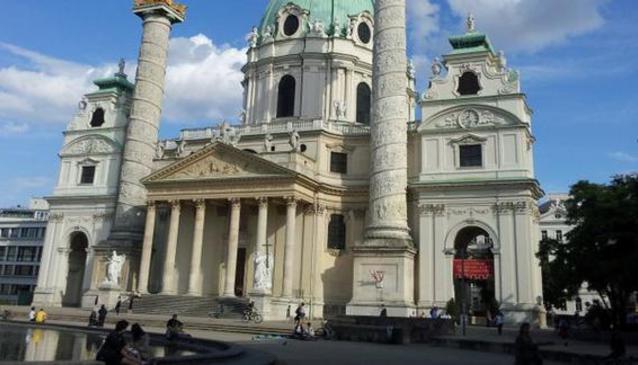 Are you a business owner in Vienna?

Promote your business 365 days a year with the #1 Guide to Vienna.

The Karlkirche construction begann in the early 18th century and took more than 20 years to build.

This outstanding church was planned by a famous Austrian Baroque architects, Johann Fischer von Erlach. The church is really spectacular! Go and have a look.

The church was built to commemorate the svere plague epidemic under Emperor Karl VI. and was dedicated to saint Karl Borromeo - hence the name Karlskirche today. The 2 huge colums you see flanking the main entrance of the church represent the life of Saint Barromeo - ithe entrance resembles a bit a Greek temple...once inside - have a look at the magnificent dome (72 m high) - it is covered with spectacular frescos and paintings - for further information on this cathedral please refer to our TOP ATTRACTIONS section.

Also worth noticing is the square in front of the church - the Karlsplatz: a beautiful square designed in the 1970s by one of the most important sculptors of the 20th century: Henry Moore. His artwork 'Hill Arches' is placed in the oval water basin right in front of the Karlskirche and which reflects the church building - check it out!