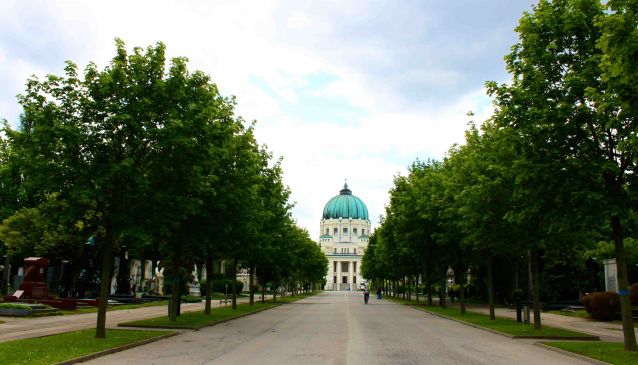 We won't bore you with dates or statistics, but we'll just tell you that this cemetery is about 150 years old, it's so big that the Viennese like to refer to it as 'half the size of Zürich, but twice as much fun' and it hosts almost twice as much deceased people as Vienna's living population. This is by far one of the grandest cemeteries ever built.

And, well... maybe it's not really 'fun' we're talking about but for sure a great degree of inspiring walks in an astonishing surrounding... Apart from the magnificent entrance of the cemetery, as soon as you get in, you'll be welcomed by a tree-lined boulevard built astonishingly symmetrically and in the perfect middle of it you will see the famous Church of St. Borromeo.

The Church, crowned by large turquoise domes, is a perfect display of the Viennese Jugendstil. Also all other important edifices, main gates, laying-out rooms and the waiting room are manifestations of the renowned Jugendstil of the beginning of the 20th century.

Before the church, you'll get to probably the most famous highlight of the cemetery: the composer's section. Here Mozart, Beethoven, Brahms, Schubert, Strauss, Salieri and many others have their wonderfully constructed vaults and cenotaphs in their honor, although they might not necessarily be buried here. Here, you will see some of the munificent and lavish graves commissioned by the Viennese high-society throughout the centuries.

In addition to the Catholic section, there is also a Protestant cemetery and two Jewish ones. The Nazis destroyed the older one of the two during the famous Kristallnacht but around 60.000 graves are still intact. Here, personalities such as the Rothschild Family and Arthur Schnitzler are interred. The second Jewish cemetery was built in 1917 and is still used today. Another peculiarity of the Zentralfriedhof is that, since 1867, also Muslims are buried here. However, because of the Austrian law, the dead are buried in coffins instead of using the Muslim ritual of burial in a shroud.

Another interesting section of the Central Cemetery to go see is the Buddhist section, all within walking distance from the main entrance. This part was opened in 2005 and it was the first Buddhist section opened in a cemetery in Europe. It was consecrated by a Tibetan monk and has a Buddhist 'stupa' in the middle. Here, the graves don't have a name or a date on them but colorful flags are hung as a sign of respect for the dead. In Buddhism, however, cremation is the most common practice.

While walking around the Zentralfriedhof, you'll surely stumble upon uncommon sections. Some other interesting ones is the 'Russian Section', where soldiers were buried after the end of WWII and the German defeat or the 'Anatomy Memorial', which is a graveyard of the Anatomy Institute of Vienna where people who donated their body to science are honored.