Vienna’s cemeteries are just something out of the ordinary! This is mainly due to the fact that the Viennese have a special relation with death: they sing about it, build monuments to it and celebrate it with extraordinary dignity - they call this slightly macabre passion for death the “last festival of life”. 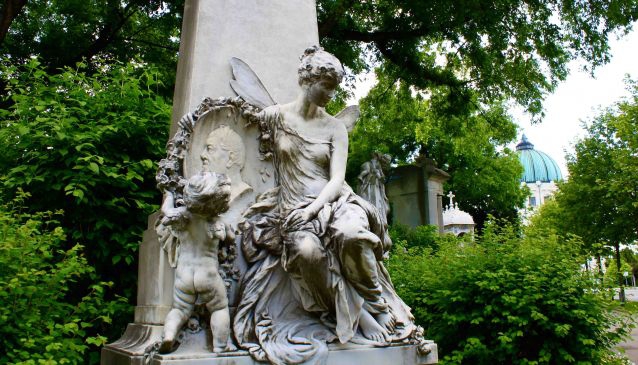 One of these most famous celebrations is the “Allerseelen” Day, also called “All Souls Day”. In Austria this is a national holiday - the celebration falls annually on the 2nd of November, exactly on the third day of the Hallowmas, also known as Halloween. What does it mean? All Souls Day is a “Celebration of the dead”, when people worship and express sorrow for the deceased ones. On this day the Viennese go out of their way to honour their beloved deceased family members: they buy lavish flower arrangements for the graves and organise family outings to visit their family’s graves, they light candles there and spend hours cherishing their memories. If you happen to be in Vienna on this date, have a look and visit some of Vienna’s cemeteries: it’ll be a slightly morbid yet gleeful experience! 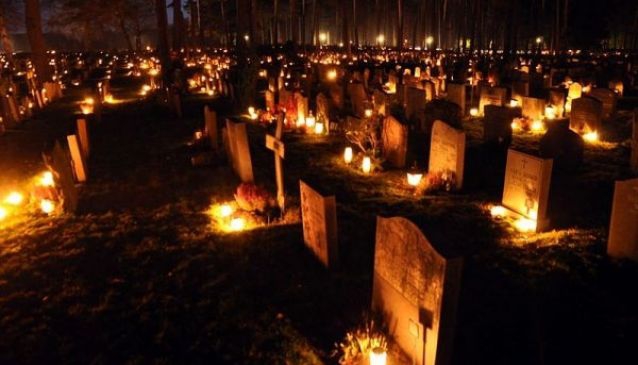 Vienna’s most famous cemetery is the “Zentralfriedhof”; the “Central Cemetery”. We won’t bore you with dates or statistics, but we’ll just tell you that this cemetery is about 150 years old, and it’s so big that the Viennese like to refer to it as “half the size of Zürich, but twice as much fun” and it hosts almost twice as much deceased people as Vienna’s living population. This is by far one of the grandest cemeteries ever built.

A visit here is maybo not really “fun” in the literary sense but for sure you will experience a great degree of inspiring walks in an astonishing surrounding… Apart from the magnificent entrance of the cemetery as soon as you arrive, you’ll be welcomed by a tree-lined boulevard built astonishingly symmetrically - and in the perfect middle of it you will see the famous Church of St. Borromeo. 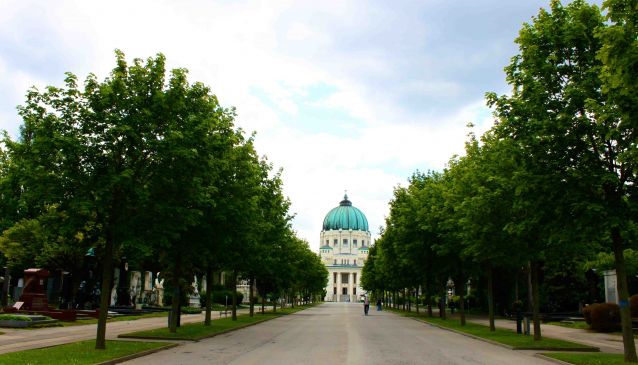 The Church, crowned by large turquoise domes, is a perfect display of the Viennese Jugendstil. like many other important edifices and main gates in this area. Just before the church, you’ll get to probably the most famous highlight of the cemetery: the composer’s section. Here Mozart, Beethoven, Brahms, Schubert, Strauss, Salieri and many others have their wonderfully constructed vaults and cenotaphs in their honor. You will see some of the most magnificent and lavish graves commissioned by the Viennese high-society throughout the centuries - the more popular the composer, the more impressive the burial place. 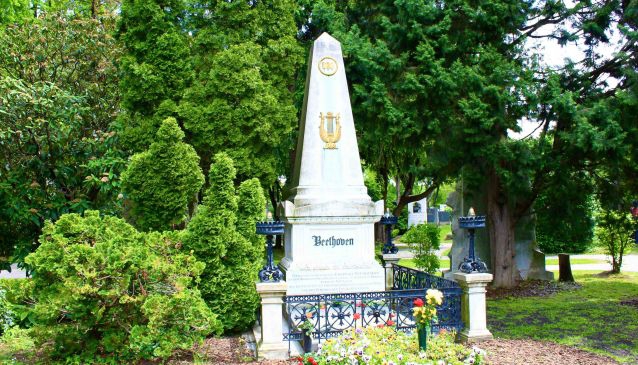 You will find many religious sections here. In addition to the large Catholic section, there is also a Protestant cemetery and two Jewish ones. The Nazis destroyed the older one of the two during the famous Kristallnacht but around 60.000 graves are still intact. Here, personalities such as the Rothschild Family and Arthur Schnitzler are interred. The second Jewish cemetery was built in 1917 and is still used today.

Another peculiarity of the Zentralfriedhof is that, since 1867, also Muslims find their burial place here, but because of the Austrian law, the dead are buried in coffins instead of using the Muslim ritual of burial in a shroud. 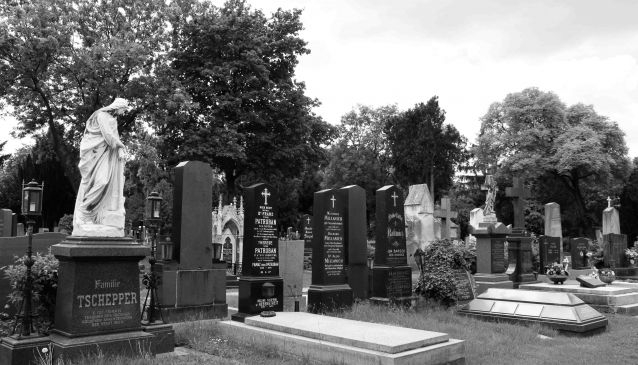 A real highlight is the Buddhist section that was opened in 2005 - and it is the first Buddhist section opened in a cemetery in Europe ever. It was even consecrated by a Tibetan monk and has a Buddhist “stupa” in the middle. Here, the graves don’t have a name or a date on them but colorful flags are hung as a sign of respect for the dead.

While walking around the Zentralfriedhof, you’ll surely stumble upon uncommon sections, like the “Russian Section” - here soldiers were buried after the end of WWII and the German defeat. Another example is the “Anatomy Memorial”, which is a graveyard of the Anatomy Institute of Vienna where people who donated their body to science are honored. 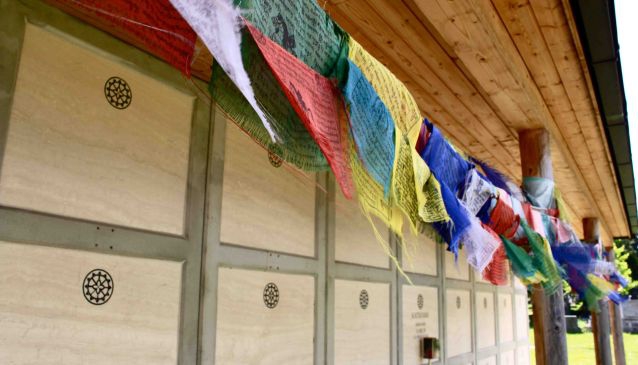 Insider tip: since the spring of 2012 you can visit the cemetery the same way the nobles used to do centuries ago: you can book a carriage ride. At the carriage rank (gate 2), you will find the "Fiaker" parked all day from 10 am until around 7 pm. The tours include a variety of memorial graves of all the most prominent Viennese personalities. There are two options: either you go on a short tour of 30 minutes for 40€ or on the long one lasting 60 min for 70€ per carriage. Each carriage fits four people and the tours take place from the beginning of April until the end of September. You can also reserve your ride by calling +43 (1) 699 181 540 22. 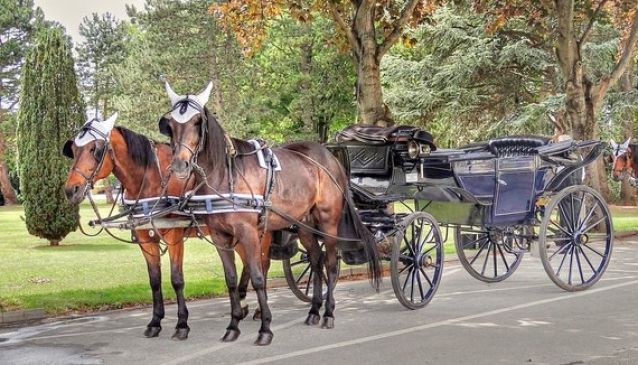 The famous lilies in Vienna's cementaries are an absolutely lavish landmark here in Vienna - and a real insider tip. If you happen to be here in May you should really go and see them blossoming everywhere among all the beautiful graves and alleys. They are particularly beautiful and impressive in the St. Marx Cemetery. Here you will find the "real Mozart grave", or at least this is what many Viennese believe to be Mozart's burial place. Mozart died from illness and in bitter poverty. In those times emperor Joseph II ordered for poor people to be buried in unmarked graves and without coffins, Mozart’s actual burial place isn’t certain. Nonetheless, one of the most idyllic places to see at the St. Marx Cemetery is certainly Mozart’s gravestone (with a beautiful white guarding angel) that was erected in the approximate location of a mass burial site. During blossoming time, this is a remarkably picturesque spot. 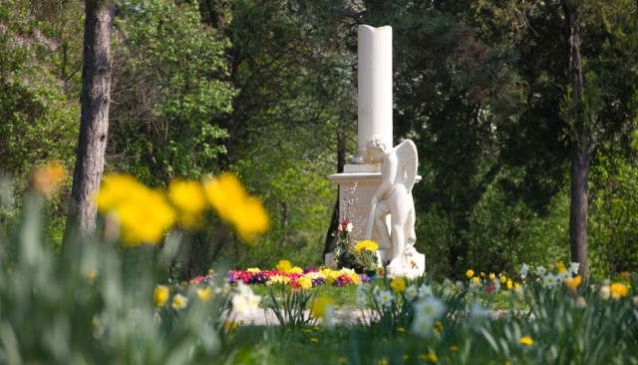 You must be thinking that Vienna, being a city that expanded in the past centuries, can’t have all its cemeteries en-plain-air (open air)! Well, guess what? You’re right! And for those of you who have a preference for the macabre… this is a place you’ll want to see! St. Michael’s Church is mainly visited for its very interesting catacombs… Thanks to peculiar climatic conditions, the bodies in these catacombs haven’t decomposed for over 300 years! And today, people can still see hundreds of coffins decorated with flowers, skulls, baroque flock-coats, wings and mummified corpses! The atmosphere here is really unique, somewhat surreal. The Church itself was built at the beginning of the 14th century and is worth going to visit also for the Roman excavations in front of it that were discovered in 1991.

Another astonishing crypt, is the Imperial one. It was built in the middle of the 17th century and the Habsburg Dynasty wanted to show its power and wealth. The crypts are located with a Capuchin Monastery and the coffins are guarded by monks. 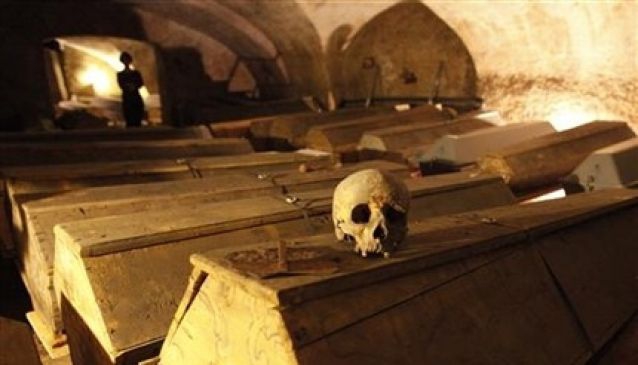