Please Sir - Can I Have Some More?

Viennese cuisine is like a patchwork quilt, the result of a European culinary brainstorm...

Viennese cuisine is like a patchwork quilt, the result of a European culinary brainstorm involving influences from neighbouring countries such as Italy, Bulgaria and Hungary. The Austrians aren’t afraid of serving up plates overflowing with food, either. Some traditional restaurants in Vienna (or 'Beisls') offer up to seven courses of the finest local and regional Austrian food.
Beisls are not very hard to find; wherever you are in Vienna you’ll probably stumble across one. However, as with most places in life, some Beisls are of a higher quality than others. If you do happen to walk into one, though, heed this warning: be hungry. Be so hungry that you could chomp the wallpaper off the walls and chew on the paste underneath. Viennese cuisine isn’t exactly light – although a commendable amount of care and consideration goes into creating such gastronomic fascinations.
Defenestrate your eating schedule, too. If it’s a seriously traditional Beisl, your pudding could double up as a main course. You’d struggle to find anywhere else in the world that adheres to this method, however, as a small aside to accompany your sweet main, there’s a bowl of bouillon, a clear soup. Hopefully, all of this won’t finish you off before you get to the meat of the meal (if you can eat that much) because, traditional Viennese sweet dishes are pastry and cake-based; strudels, soufflés, sweet potato dumplings and sweet omelettes abound. Such delicacies can also be found in most Viennese coffee houses, too. So, if you’d rather pop into one of those for a simple snack, that option is available. 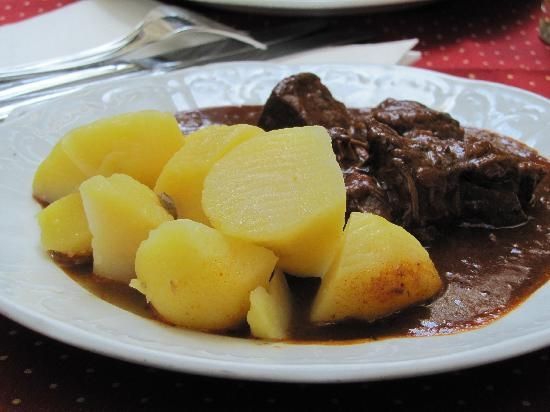 Back to the dinner table, and the plates have been cleared; it’s time for traditional starters and meaty main courses. Soups serve mainly as starters, bouillon especially. The proverbial ‘icing on the cake’ with bouillon varies from chopped chives, to shreds of biscuit with mixed herbs. It’s all a very confectionery-meets-savoury affair but it works a treat, making for one of the world’s most unique and diverse cuisines. Going back to Viennese roots, however, you’ll find Wiener Suppentopf, an amalgamation of noodles, sausage, stewed beef, peas and root vegetables – it’s bound to satiate any hunger with its warmth and bodily depth.

As far as meat goes in Vienna, they’re fanatical about it. Perhaps the most famous representation of Austrian cooking is their Schnitzel. Breaded pork or veal deeply fried, sprinkled with lemon juice, and served with a hearty helping of seasoned potatoes, makes for a challenging but tremendously tasty dish. Alternatives are available, however, in the form of stewed meat – a healthier method of cooking, perhaps, but each as tasty as the other. Tafelspitz is the exemplary stewed beef dish served, again, with potatoes and a selection of sauces.
Further on in the menu you might come across a Viennese speciality which is not for the faint-hearted: Beuschl, similar to tripe but a little bit more select. Whereas tripe could be described as a bucket-full of leftovers, Beuschl only consists of the animal’s trachea and lungs. They are boiled and marinated after being sliced into strips, and served as a stew. In order to soak up every drop of the delicious broth, a breaded dumpling called a Serviettenknödel may be supplied to rip up and dunk in the juice until the bowl is bone-dry. 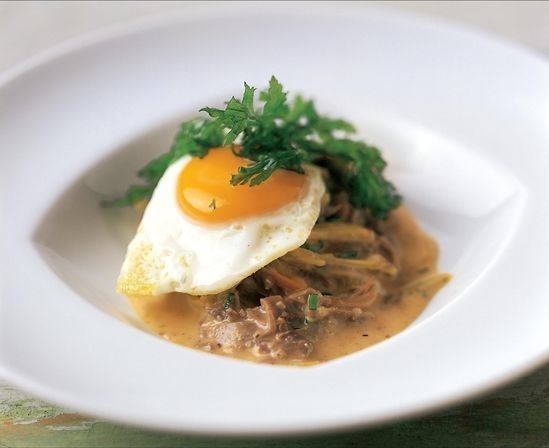 So, with what can you wash these numerous platefuls of culinary excellence down? A  mug of beer is a popular option, as is a slender glass of wine. Sekt, a sparkling wine, is a refreshing choice, as are spritzers. The Viennese are extremely proud of their wine production. So proud in fact, that both tourists and locals pay several visits to any nearby wine tavern which, in Austria, is called a Heuriger. These taverns are where you can purchase and consume the best wine on offer, whose grapes have been freshly squeezed from the rows and rows of endless vineyards which line the landscape like claw marks.

One particular Heuriger just north of Vienna itself, in a place called Stammersdorf, is a classic example of where to buy some fine wine. Nestled at the foot of the Bisamberg in very secluded surroundings, Stammersdorf is a place where not many tourists visit, although frequenting a Heuriger is something the locals like to do a lot.
Quiet lanes meander through the countryside, all lined with wine cellars as well as the tavern itself. On perfectly sunny days, there’s nothing better than sitting outside in the silence, sipping a cool glass of Austria’s finest. Be aware, however, that opening times are up to the tavern owner themselves; it’s very much a weather dependent scenario. Some owners choose to open every two months, while others prioritise weekends. Seeking out local knowledge is essential to arrive with enough time to enjoy a relaxed glass – you simply cannot rush these things. 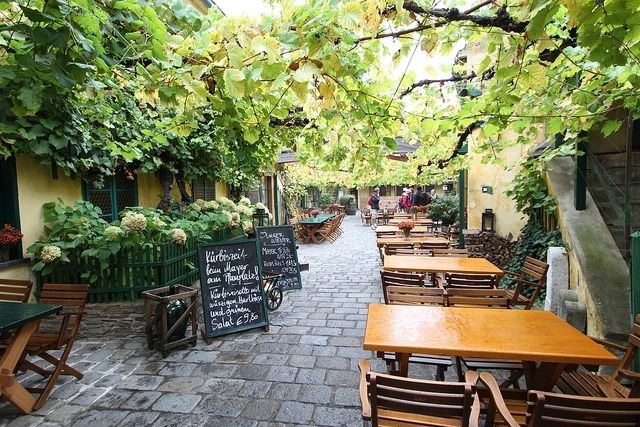